The Eurostar goes both ways 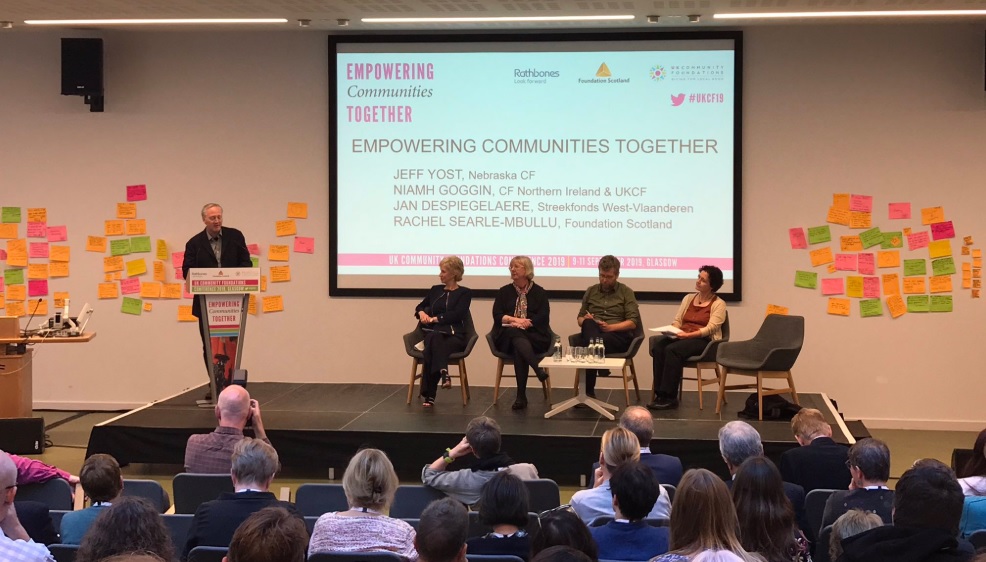 This piece originally appeared on the Alliance magazine website.

At the 2019 UK Community Foundations (UKCF) Conference, I was asked to give a five minute “lightning talk” on the closing day, sharing my views and perception of what the conference theme “Empowering Communities Together” means to me, along with three other fine colleagues: Jeff Yost of the Nebraska Community Foundation, Rachel  Searle-Mbullu of Foundation Scotland and Niamh Goggin of the Community Foundation for Northern-Ireland.

This is a written executive extension of my talk, which was elegantly shut down when going overtime by Conference Chair and BBC Radio Scotland’s finest Sally Magnusson, by giving me a post-it saying “time’s up!”, where for a second I thought she was giving me her phone number.

I’ve been in this field for 15 years but will never forget my first few weeks when I was given the opportunity to visit the Community Foundation Tyne & Wear and Northumberland. The King Baudouin Foundation, who just had hired me to start the first community foundation in Belgium, sent me there to get an idea of what a community foundation really is and I would probably not be working in this field anymore if they hadn’t done so. Not only because of the knowledge and expertise that was being shared, but also the passion and professionalism of a dedicated team that – in a very early stage of my job – made me feel part of a bigger movement.

My first UKCF Conference was in in 2009. So when, UKCF CEO Fabian French asked the audience on day one if this was there first, second or maybe even third conference, I felt extremely old as this turns out to be my sixth. When the first conversations were all about the same topics we’ve been discussing for over ten years, I must admit I felt a bit frustrated. Frustrated, but also slightly worried asking myself (apparently a bit too loudly on Twitter) if the community foundation movement has actually moved forward at all? Not only in the UK but also in other countries where, despite a lot of new approaches, ideas and exciting trends, the same topics seem to be in need of re-chewing over and over again without finding a solid – ha – foundation to build upon.

I do acknowledge and applaud the fact that new people must be given the opportunity to have their part in these discussions and as such the opportunity to weave their bit of the fabric, or to be able “to look at old issues through new lenses“ as Rob Williamson so eloquently nailed it. But we also need to be aware that building on some collective memory is essential in the challenging times ahead. If one of the never ending topics is the lack of visibility of us as a sector compared to the bigger and more institutionalized philanthropic players, then providing a solid ground to build upon is no wasted energy, and a necessary long-term investment.

Enter day two, where after a wonderful dinner and despite the acoustic turmoil of the Arches, I woke up with the tones of “Always look on the bright side of life” by the great English philosopher Eric Idle. Things could only get better and I had to start thinking about my view and experience on the conference’s topic “Empowering Communities Together.” Luckily, I did not realize yet I would not be able to add anything sensible that would not already have been said in a much smarter way by my enlightened fellow panel-speakers.

Apart maybe from the fact, that despite the enormous progression and professionalization UK community foundations have made, no one really seems to acknowledge the value of the collective human capital sitting in that conference room. Or at least, not at the same level of our financial capital, endowments or reserves. Why don’t we? Why not acknowledge the value of this collective human capital as a key element in “Empowering Communities Together”, and be proud of it? Being aware of the value you bring as a piece of the whole fabric, whether as a grant manager, philanthropic advisor, communications or HR (you’re usually the same person aren’t you?) or even CEO or Trustee. You are part of a bigger movement that is just out there to tap into. To be inspired, to be nurtured, to be empowered.

I can only recommend the question “which band came from your community?” as an opener to get to know the people in the movement and their respective organizations and communities. Knowing now that “The Sisters of Mercy” and “ALT-J” are originally from Leeds has led to me knowing more about the Leeds Community Foundation and its work than if we would have talked about the size of their endowment. It’s the personal connections that make the fabric work, and from where you can build upon to more professionally relevant topics. (Then you are allowed to say how big your endowment is, but be aware that no one likes the people with the biggest endowment.)

This leads me to my final, but most crucial reflection. If there is such a thing as a movement then it is not limited to the UK. There is a whole world of community philanthropy organizations out there, community foundations or not, and each one of them – no matter how big or small – has an active and empowering role in its respective community. And while people in this movement are looking at the UK as one of the champions in community foundation-world, the UK is merely looking at this global movement.

I must confess this is bugging me a bit. We know we are always welcome to come and learn from the UK colleagues but we are now at a time that UK colleagues can learn a lot from what’s happening in community foundations around the world. From roundtables at the Bürgerstifting Stuttgart to the washing machines in Valmiera, Latvia. From community-led social enterprises in Italy to civic engagement programmes in the Balkans, which are all involved in the European Community Foundation Initiative. I’ve not even started about the mosaic of hundreds of amazing community-led initiatives and projects, looking in their own way to build capacity and trust in their communities in the global south, supported by the Global Fund for Community Foundations.

I am convinced that being more involved, or even just more aware, would have a positive impact to your own work and benefit your own communities. Talking about our collective human capital is just that. We need you to be there. We want you to be there. And despite how much we all like to come to the UK, please do know that the Eurostar does go both ways.

Jan is the best!