From pies to a Giving Circle: Changing the life of a Karelian village in Russia 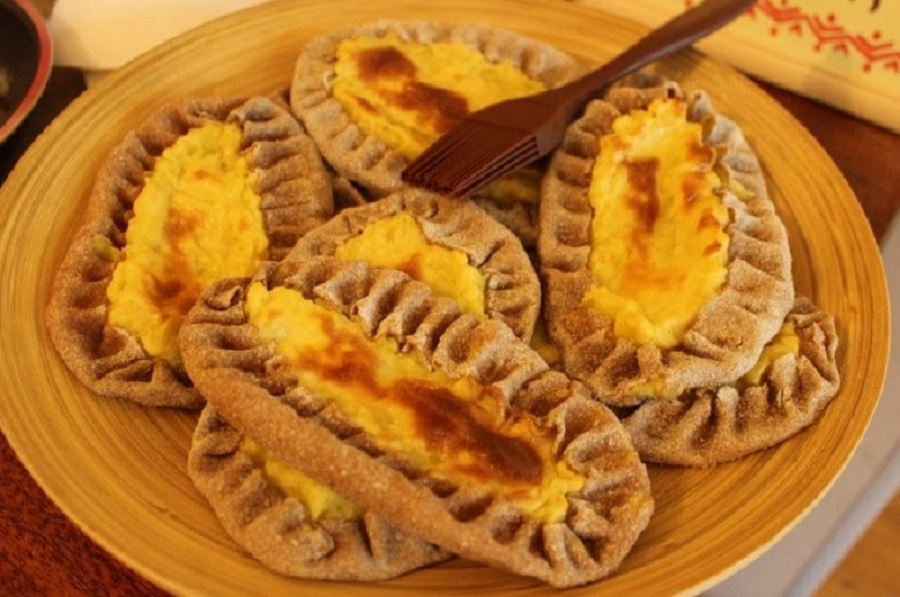 The Melnitsa Foundation of Pryazha District started its work in 2014, baking pies. It is based in the Karelian village Pryazha (population 3,500) in Northern Russia. As the Russian word “Melnitsa” translates to “Mill” in English, the organization is often referred to as the “Mill Foundation.” Today, it is one of the most visible community foundations in Russia, implementing several large-scale programmes, organizing grant competitions, supporting the revival of local crafts and traditions, and holding various fundraising events. Vera Titova, a board member of the foundation, shares its story and explains how the Mill Community Foundation shifts the power to the villagers. 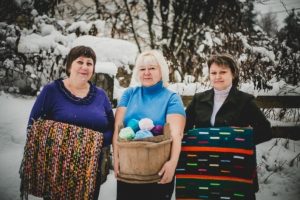 Supporting the revival of local crafts

At the heart of the Mill Foundation is an active and committed person – Ekaterina Efremova. She has a degree in sociology, and lives in a small village simply because she enjoys life like that. It is the same story with me. I was born in Moscow and I lived there for 25 years. However, my roots were always in Karelia and I spent summer vacations here with my grandmothers. I finally moved back to Karelia, to the land of my ancestors, six years ago as – fortunately – my profession allows me to work from anywhere in the world.

“Downshifting” is now a buzzword for when people abruptly change their course in life – like abandoning homes in big cities and going off the beaten path. This often means moving to some warm place by the sea, such as Bali, to swim and indulge in meditation. But the North of Russia is no worse than Bali! Here, you can also meditate, and most importantly, life is much more interesting.

The purpose of our work at the Mill Foundation is to give local people a chance to start thinking in terms of local successes, rather than failures. This is, in fact, the basis of civil society: to awaken a desire to change something for the better, and to influence what is happening around you. The Charities Aid Foundation Russia (CAF), which implements the programme supporting community philanthropy development in Russia, has helped us a lot through the various stages of establishing a community foundation.

The story of the pies (and a hockey rink)
Now on to the pies, which is actually a story about our first grant. Once upon a time, hockey was popular in our area. The team from Karelia was famous throughout the North-West, but over time, it broke up. The equipment and facilities that the team had been using became run down and worthless. Ultimately, local children had nowhere to play hockey, so the Mill Foundation started to look at how to improve the situation through our new programme that aimed to support local initiatives. Through this programme, we managed to secure part of the money for the new hockey rink’s construction from the local government, and part of the funds from the Republic of Karelia administration. However, the rest was to be raised by the local community.

The task was tough: how would we, with the support of the locals – who had never participated in any similar fundraising initiative before – collect more than 200,000 rubles?

Adults, at first, did not understand why they should support charity events and donate money to construction efforts, saying: “Let the administration build it!” So we had to be creative, and come up with different approaches: a flea market where residents bought and sold various items, selling pies, etc. Interestingly, children turned out to be much more active in these activities than the adults. The children desperately wanted a skating rink in the village, so they were also chipping in where possible, even baking and selling their own pies. These various fundraising efforts were successful and, when combined with a grant from the Elena and Gennady Timchenko Charitable Foundation, we managed to build the rink! Locals quickly swarmed the rink, thrilled it was back, and spent time happily skating with their families.

By fundraising for the hockey rink, the community had realized that they had the power to change lives in the village for the better. The local hockey players even pooled their own funds together to build a warm locker room connected to the rink. One local resident started to coach children’s hockey for free. Now we have the Meteor hockey team. From all over Karelia, both the young and old are coming to Pryazha to play. Our locals clean and fill the rink with pride. What wouldn’t you do to nurture your own local Malkin or Ovechkin?

A spark in the park! 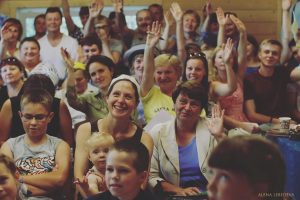 Over the least five years, we have advanced from pies to more modern tools. Last year, thanks to The Funding Network and CAF, we attended a Giving Circle event in Latvia and decided to give the model a try in Pryazha. To choose the three projects that would be featured at the Giving Circle, a selection panel was formed that included representatives of the village administration, local businesses, as well as active residents. 92 villagers attended the Giving Circle, which was held in the park. We served tea and presented the projects.

Our local policeman said that he would donate 3,000 rubles if one of his friends who was present told a joke. The friend shared his joke, and then the comedy and fun began! Everyone started to tell jokes in a circle, which were kind and not dirty at all, and to donate money. We raised 82,700 Rubles for three projects, which are already being implemented.

People not only donated money, but they also offered in-kind help to the projects. This is exactly what we were aiming for: to engage locals in charitable actions, beyond just the giving of funds. As a result of our evening in the park, a very beautiful information stand made of timber, with a map of the village showing significant and interesting places, was built at the central square of Pryazha. This is very useful for visitors. Additionally, a “summer stage” was built near the Centre for Leisure and Creativity, where outdoor cultural events can be hosted. Finally, there is a new play corner at the children’s health centre, which had been requested by local paediatricians. The corner is now a creative space full of “busyboards”: interactive development boards for children, with entertaining buttons, locks, pins and other items to twist, pull and crank. It was constructed collectively, and with much love, by local craftsmen. 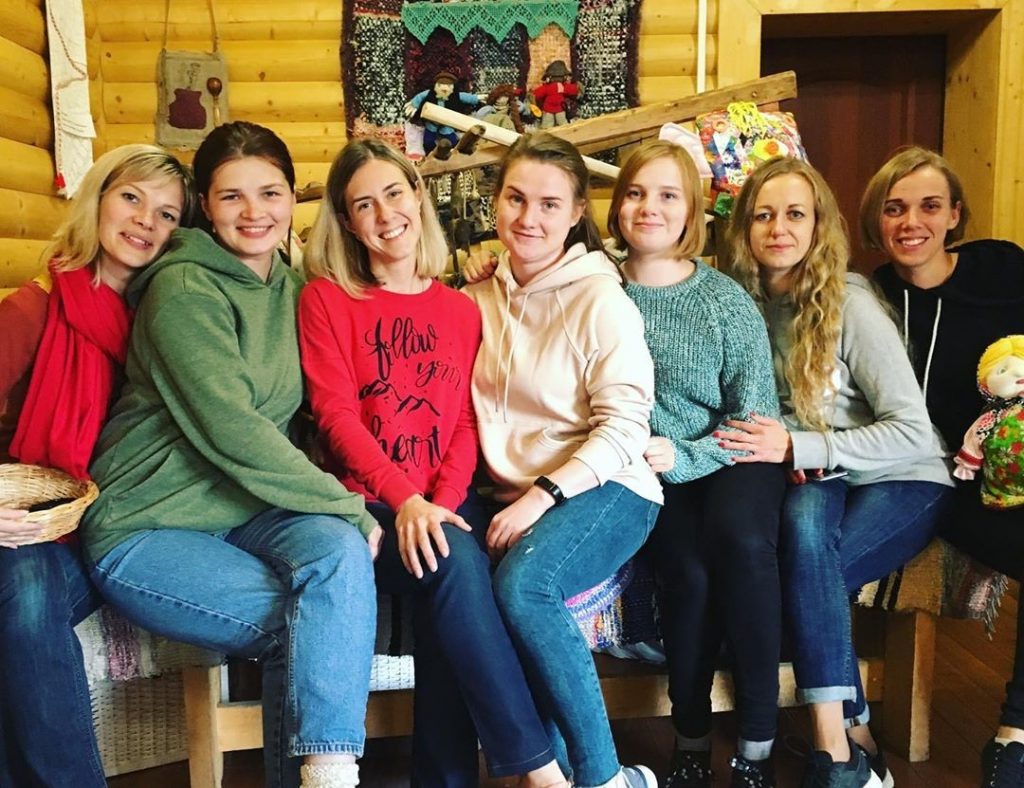 The Mill Foundation team, made up mostly of volunteers

#ShiftThePower Pryazha
Today we use three tools which actively #ShiftThePower to communities and catalyze community-led development and responsibility: #GivingTuesday; “Community’s Social Passport” (much like the “Vital Signs” initiative from Community Foundations of Canada); and, as noted above, Giving Circles. We are really learning what we can from international practices! But we have been most amazed to see how people have become the driver of social change in our village. They convene, sharing ideas and challenges, while also brainstorming how to use their own resources to make life in Pryazha better.