Webinars explore 45° Change: Where bottom up meets top down 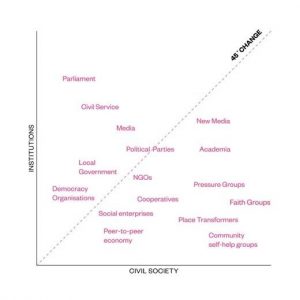 The Pathways to Power Symposium aimed to take discussions around #ShiftThePower to the next stage by developing strategies to make the idea a reality.

One promising approach is 45° Change, which offers a method of joining up the forces of horizontal power (for example, civil society and community philanthropy) with the forces of vertical power (for example, government and funders). The 45° angle, where bottom-up meets top-down, is the fault line through which a new society can be created. What matters are the ways in which people and organizations on either side of the line interact and work together in new and transformative ways.

Two webinars organized by the GFCF and Compass, held on 30 October 2019, explored the framework further (recordings of both are available below!). As noted by Neal Lawson, who developed the thinking around 45° Change:

“This is not just about the state adapting itself. It’s about civil society leaders realizing that we’re not going to get greater equality, we’re not going to deal with climate change, and we’re not going to deal with injustice or civil liberties unless we deal with everything, and work across the framework, with lots of different people. If we stay in our silos, we’re in trouble. But if we work out how we join everything up and act in a political way, and how to build a relationship with the state, and get the state to help us with the resources, with the legislation, with the rhetoric, that can help bring together quite amazing new practices, new ideas about collaboration, cooperation and participation. The 45° line is the space where this can happen.”

Read more about 45° Change and a blog response to the approach, 45° Change shows the way from Jon Edwards – an advisor on philanthropy with a particular focus on international development and disasters.