The current international development and humanitarian aid system is ripe for change. In the last few years, movements such as #AidToo and #CharitySoWhite have increased pressure on donors and INGOs to rethink their roles and to shift and share power with organizations and communities in Asia and Africa.

In 2020, the COVID-19 pandemic and the Black Lives Matter movement further fuelled calls to “decolonize” and “localize” aid, re-energizing long-standing critiques of the structural power imbalances within the aid system and re-affirming the essential role of trusted and credible local civil society actors. At the same time, there is a growing consensus that increased equity in aid programmes is not only the right thing to do, but it is also the most effective; when local actors play a central role in shaping and delivering programmes, the outcomes are more durable and effective.

The roles of racism and colonialism

It is useful to historically understand where dominant aid systems come from, to understand why we need to support a pathway that will enable systems and ideas that have previously been marginalized to emerge and become central.

The roots of this dominant system were planted within the context of racism and colonialism. Colonizing countries created a binary narrative to market to their populations which used racist stereotypes to justify colonialism and harmful power dynamics within foreign aid. You can find out more about this history and binary narratives at Decolonial by Design. 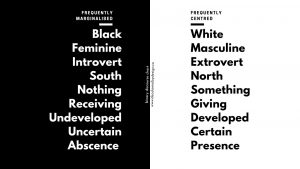 This binary contrast was used as a form of oppression and symbolic violence, and ultimately it is at the root of the narrative that communities are “undeveloped” and “lack capacity”, and therefore the West need or has almost a moral obligation to support their development. 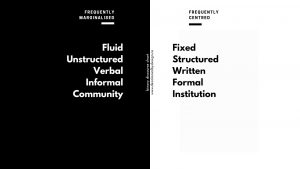 There remain barriers rooted in historical funding structures and practices that prevent local/community organizations from accessing funds and the sector from moving towards a model of equity. The West continues to favour fixed, structured processes, the written word, and trust in formal institutions over less structured fluidity, informality, verbal expression, and trust in communities. These values are manifested very clearly in the way most funding structures and practices operate.

But these dominant systems are being challenged, and alternative ways of deciding and doing are emerging – often outside the mainstream development system. These previously marginalized practices are grounded in a focus on communities, agency and participation, horizontal accountability, mutuality and solidarity, love and compassion. They are shaped by local context and opportunities, and the belief that development can and must be done differently.

Community philanthropy is one example of this “new democratic movement” in aid and philanthropy. By emphasizing the role of local resources, community philanthropy encourages communities to co-own and co-invest in initiatives that reduce their dependence on international funders and increase their standing among local stakeholders, while also providing civil society actors with a way to reposition themselves in relation to the communities they serve, both in terms of power and accountability. There is a growing evidence-base on community philanthropy, and funders are starting to pay attention, though this approach continues to be largely overlooked by the dominant system, where the “transaction of resources” continues to overshadow any real transformation of power.

The NEAR Network and the #ShiftThePower movement are seeking to increase the visibility of actors from communities in Asia and Africa. They have advocated for increased flows of resources, and drawn attention to the existing infrastructure of trusted local entities that can leverage different kinds of resources and disburse funds effectively to grassroots and civil society actors. Advocates inside some of the big development institutions are also helping to drive change. Initiatives such as USAID’s Local Works, the Dutch Ministry of Foreign Affair’s Power of Voices, FCDO and Comic Relief’s Shifting the Power and others have all created spaces and resources for experimentation and innovation that particularly focus on emergent practices.

From partnerships to co-conspirators

So how can funders and INGOs transcend partnerships to achieve something better? The Philippines’ Center for Disaster Preparedness (CDP) provides an interesting example. CDP now uses a model of disaster risk reduction and management that is inherently community-based, one that puts the people affected by a disaster at its heart. To support this model, the organization continues to explore domestic resource mobilization, recognizing that communities have financial and non-financial assets. But also, CDP believes that funds from donors in the West can and should be used to support existing community efforts and alternative resource models, rather than being used for short-term projects that have little long-term impact.

Here are the changes that CDP has made and recommends: