From Brazil to Africa, the transformative potential of community philanthropy and social justice

This blog originally appeared on the website of Rede Comuá. 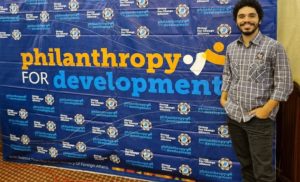 After three plane rides, two connections and more than 20 hours of travel, I arrived in Entebbe, Uganda, with the mission of representing Rede Comuá in two activities: the GFCF partners’ meeting (the GFCF is the only organization focused exclusively on growing community philanthropy globally as a central pillar of people-led development), and at the Africa Philanthropy Network (or APN, formerly known as the African Grantmakers’ Network) conference. The conference was the first to be held after the COVID-19 pandemic, and the theme this year was “Driving Change.” Both the GFCF and APN are partner organizations in the Giving for Change programme, along with Rede Comuá.

I arrived in the middle of the night without yet being able to fully appreciate the scale of our host: Lake Victoria, one of the African Great Lakes. According to legends, the spirits of ancestors continue to dwell in the lake. Participating in two activities that celebrated and honoured ways of doing philanthropy that remind us of ancestral practices of engagement and community development became even more symbolic on the shores of Nnalubaale (as Lake Victoria is called in Luganda, one of the languages spoken in Uganda).

During the week I was in Entebbe, I had the unique opportunity of meeting organizations and leaders from across the African continent who are committed to community-led philanthropy. These actors also recognize – across the diverse places where they operate – that when local assets, resources and knowledge are mobilized, this is when true social transformation and community development happens. This is the basic premise of community philanthropy.

For members of the Rede Comuá, community philanthropy is inseparable from philanthropy for social justice – which is understood as philanthropy committed to guaranteeing and ensuring access to rights, especially for minoritized populations. In Entebbe, I was able to interact with representatives of other organizations committed to this same mission, adapting it to the needs and realities of their own contexts. I realized that we shared many of the same challenges, including shrinking civic space and regular threats against activists and civil society movements. But, at the same time, we are guided by similar sets of principles and values (namely, being rooted in local knowledge, practices and experiences) that are upending the traditional power dynamics that form the very basis of the philanthropic and international development systems.

In this sense, I came back from Uganda even more certain that collaboration between organizations, leaders, movements and activists from the Global South is essential if we are to see the changes we want in the philanthropic ecosystem – whether in Brazil or in other parts of the world. By mobilizing, for example, joint advocacy initiatives aimed at donors and decision-makers, we put into practice the principles of movements such as #ShiftThePower, and build the system that we really want.

I would like to close by highlighting just some of the organizations that I had the pleasure of meeting during this unique experience in Uganda. Just as they were for me, I hope they will be a source of inspiration for you, reader, in the fight for truly transformative philanthropy:

I enjoyed reading your experiences…nice to reconnect here, Jonathas!