Sunday 24 November 2019 was the presidential election runoff in my country, Romania. After exactly 30 years from the revolution against the communist regime, the “battle” was between a not-very-convincing Liberal candidate-President in office, and the former Prime Minister, a woman-leader of the Social Democrats, which bear the image of direct descendant of the Communist Party. This was the actual governing party for a big part of the last 30 years, when the state was captured by a very corrupt political class. It wasn’t the runoff we wanted, but we all know that big societal changes take generations to become effective. But we are making progress – we needed 30 years to be aware of our power in liberating the democracy. 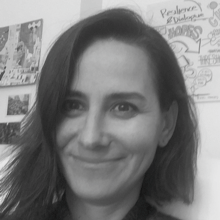 I see no better time to reflect on power and the relationship with power, than now.

Fortunately enough, I participated in the Pathways to Power Symposium last week, organized by the GFCF, so I feel better equipped for this analysis. The two days of the Symposium were very intense, both emotionally and in practical thinking. With over 15 speakers from Africa, Asia, Europe and Canada, as well as intensive group work sessions, we were part of a marathon that required us flexing our critical thinking muscles, strategic thinking, but also empathy, solidarity and openness.

The public perception of power in Romania is rather profoundly negative, just like in all societies going through traumatizing political experiences. Generally speaking, power tends to be identified with dictators, moguls, and rich people visible in media and public life, or influential politicians.

One paradox of power is that most of the time, the guardians of power are not the ones who own it, but those against whom the power is exercised. As said in the Symposium: “We too often focus on the power we don’t have. And this is how we think we’re weak. What if we change this lens and see what we’ve been able to do, what we’ve been able to change and to accomplish?”

A quick visit to the dictionary would maybe help us remember: power noun = ability to do or act; capability of doing or accomplishing something.

The tormented events from the past three years in Romania have proved that “ordinary people” who protested against the corrupt government gained a lot of power against the corrupted cast that captured the state for a long time. As emphasized at the Symposium, people took their power back. It wasn’t a “shift the power” move from the ones “in power” to the “regular citizens.” It was rather a different mechanism of empowerment, with individuals acknowledging and harnessing the increasing power they have when coming together.

I see “power” as an inner quality of any human being. I think that the genuine equilibrium of power in society comes when we have the space to be aware of our own value, and to express it in relation with others. And this is how sharing power starts. Why this is not obvious? Because power is “delightful” as Barry Knight put it. Addictive, we would add. So why share it?

The paradox of power is that, when using it as a weapon against others, the power is self-destructive.  The more violently it is gained and preserved, the more violently it ends. And this is because power resides in the relationships it generates. The only long enduring power is the one that focuses on the needs of others, the one that is “beyond” the beholders, that it is based on trust and empathy, when it is respect for the ones it influences.

But we need tools for this change in perspective. And we need a (re)start. Maybe the best start is to be more self-confident, as individuals, as grantees, as grass roots initiatives, as disruptive rebels of the merry-go-around status-and-power that defines the current funding markets for CSOs.

“What, how and when you fund an organization IS capacity building.” It is a political and social decision. And it is transformative when it is based on trust in the “grantee”, because trust means to share the ownership with the ones you fund, to give space for them to be part in decision making, to lead his own development. “Do nothing for me without me” – this is something that I learned when working with local communities in Guinea Bissau for eight years, and this is one of our fundamental principles in our practices as grantmaker at the Association for Community Relations in Romania.

Let’s change that! Let’s be the “tools” ourselves in negotiating this new world. Because we are this new world. And it depends on us to be inclusive, equitable, and fair.

By: Ela Bălan, Community Foundation Program Coordinator at the Association for Community Relations in Romania

This blog also appears on the Alliance magazine website. It was part of a special feature on the Pathways to Power Symposium.