Strengthening the fabric of civil society in Monteverde

In Spanish, enlace is really a beautiful word. In English it might be translated as link or network and it means those things in Spanish, too.

But if you look inside the word, one also sees the English word “lace”, as in shoelace, which ties things together, or as a lace collar that beautifies and enhances.

In Spanish it also means to intertwine, to weave together, to gradually form a fabric, a fabric tight enough to hold and connect and hope that no one falls through.

In March of 2020, a call was put out to anyone and everyone in Monteverde, individuals, organizations, governments and agencies to meet to see how, as a community, we were going to be able to face an impending crisis brought on by the COVID-19 pandemic. People responded. In the first meetings, community members identified five major areas that needed to be addressed. First, we needed information: how many people had lost jobs or had reduced hours and incomes. How many people were living in each household, including numbers of children and seniors. Much of this information existed but in various places and no one had a picture of the immediate situation. 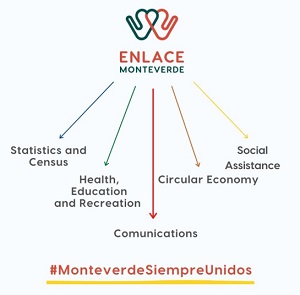 We needed to research ways, long-term and short-term, to address the economic collapse of the zone which had been based almost entirely on tourism. We were concerned for peoples mental and physical health. The socialized medical system in Costa Rica is fairly comprehensive, so we were more worried about depression, anxiety, lack of exercise due to lockdowns and social isolation. There was a real concern about food security and the need to supplement people’s diets with more than just rice and beans, although these staples also needed to be secured and distributed. We had to address the shortcomings of our local economy, its reliance on tourism and begin to close the gaps reinforcing a more circular economy. Communication was paramount to make sure that accurate information was being communicated about the pandemic, safety measures and the resources and recourses available. From these early meetings, ENLACE was formed with five sub-commissions.

The sub-commission of Statistics and Census collected extensive data on over 1,000 households, a significant number considering the population in the area is less than 6,000. From this we were able to generate a database of people most in need of food assistance. A food bank was organized in early April and food packets were distributed to between 50 to 100 families weekly for over 12 months. The Central Government began sending food packets by June, so the main emphasis locally was distribution and supplementing the basic staples with fresh produce grown locally. Previously, farmers had been selling much of their produce to restaurants or at farmers’ markets. As that was no longer an option, the Monteverde Community Fund and Monteverde Institute used emergency resources to purchase crops for distribution to families in need.

Information on local producers was gathered and contact information was distributed with publicity on social media to encourage everyone to buy locally. Traditional recipes were popularized through videos spotlighting native crops that had fallen in disuse in favour of fast foods. Experienced gardeners and farmers were recruited and subsidized for a short time to act as consultants via WhatsApp for people beginning home gardens. Soon the exchange of information was so great the “experts” joined in as participants. More than 150 people are now connected: sharing information about how to deal with pests, how to compost, the best times to plant and harvest and much more.

Growing one’s own food became so important that the traditional, “Plaza de Torros” (bull ring – see above, right) was converted into a community garden serving over 30 families. Fruit trees were distributed for free or in exchange for banana plants which grow and multiply rapidly in our area. The Monteverde Institute, in conjunction with the local office of the Ministry of Agriculture, purchased large lots of seed potatoes and sold them in small quantities at cost.

As part of the efforts to create a more circular economy, a digital and online currency based on blockchain technology was created. The program operates on a web platform that was developed by a Costa Rican company, Cambiatus, which can be accessed via mobile phones or computers. VERDES, as we call them, provide resilience to our economy. A local currency allows an easier and more equitable way to barter and trade locally produced products and services. The project has been widely accepted and used by our community with over 2,000 people enrolled, which represents almost 30% of the population. 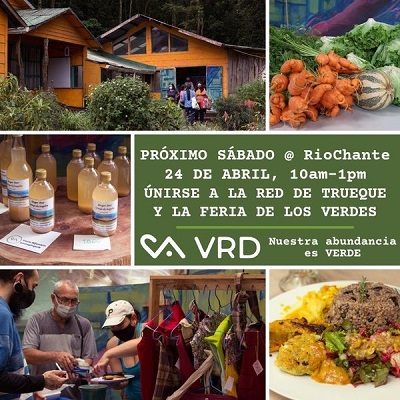 The growth of the project has been almost overwhelming. As of April 2021, with only four months in operation, the total number of VERDES in circulation is approximately $35,000 USD. The platform has an online store where people can sell anything, but the two places where VERDES are most in use are at a small local farmers’ market that is held every 15 days and at a recycling shop that excepts only VERDES or the direct exchange of articles. The store was started this year also in response to the pandemic. It is typical to see people selling their eggs and lettuce on a Saturday morning at the Fair and then using their VERDES Saturday afternoon at the “Trading Store” to buy clothes and shoes.

Just selling products and services though is not the only way to earn the local currency. Participating in various environmentally sustainable actions that address climate change and sustainable agriculture, volunteering in the community and with local NGOs, and enrolling in continuous learning classes are all ways to earn VERDES. These actions can be expanded to many other efforts and projects in the community, most of which are put forward by local non-profit organizations.

The Monteverde Community Fund had a crucial role in the forming, functioning and success of ENLACE. One of our Board Members, Guillermo Vargas, was the person who formed and coordinated ENLACE and all of its sub-commissions. Maria, our Communications and Fundraising guru, headed the Communications Sub-commission. Our Administrative Assistant, Rolando, helped with the census gathering and analysis, and I was the Coordinator for the Circular Economy Sub-commission, and worked with the committee that brought VERDES to Monteverde.

“…the last year has shown us that strength is in our connections, our spirit of solidarity, our ability to weave a fabric that covers all. Our net is a bit threadbare at present, but every strand, every contribution makes us more whole…”

But as we all know, the pandemic isn’t over. We, in Costa Rica, are experiencing the worst numbers we have had so far. ENLACE is a completely volunteer-led organization which has taxed the limit of its resources. Now is the time for long-term strategic planning to make sure that the strides toward a more resilient and circular economy thrive. The Monteverde Community Fund is currently reviewing dozens of projects which have been submitted to its small grants programme. No matter how important, we can’t fund them all because the needs have grown disproportionately to our resources. But the last year has shown us that strength is in our connections, our spirit of solidarity, our ability to weave a fabric that covers all. Our net is a bit threadbare at present, but every strand, every contribution makes us more whole and we see the fruits of our labour and are grateful that our locality had a community foundation in place that could step up and take a leadership role during this time of crisis. 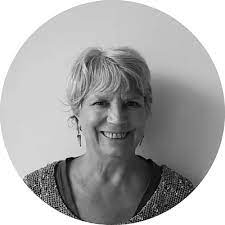 By: Jannelle Wilkins, Treasurer of the Board, Monteverde Community Fund

Excellent summary of the origins and creative contributions of ENLACE, a small community’s response to the socioeconomic impact of COVID, by a participant observer. Focus is on Monteverde, Costa Rica.