Reimagining development: The case of Uganda

This is an excerpt from a conversation with Moses Isooba and Sarah Pacutho of the Uganda National NGO Forum. The full piece is available on the #ShiftThePower Treehouse.

In 2021, Ugandan civil society was being beaten on multiple fronts. As the pandemic forced lockdowns, the country faced simultaneous crises in health, general elections and the economy.

Just when it seemed things couldn’t get any worse, the government attacked the NGO sector – suspending the Democratic Governance Facility (DGF), the funding stream for NGOs, suspending 54 NGOs due to “non-compliance” with the NGO Act 2016, and freezing the bank accounts of the Uganda National NGO Forum (UNNGOF) and the Uganda Women’s Network (UWONET) on patently false allegations of financing terrorism. Such government action to close civil society space is increasingly common across much of Africa and the world as governments fear infiltration by foreign agents and attempt to take control.

Over the past decade – which is about the same period within which the flames of civic space have raged across and beyond democratic and authoritarian political landscapes alike – governments, corporates, and intersecting interests have deployed legislation, administrative fiat, economic measures, and outright force to attain their nefarious ends.

As the CIVICUS State of Civil Society report for 2020 has found, the COVID-19 pandemic has exacerbated, accelerated and further exposed crucial global challenges that were at the fore in 2019, not least restricted civic and democratic freedoms, economic policies (like austerity) that fail most people, widespread exclusion, limited international cooperation, and a failure to follow the science and act to ameliorate the global emergency of climate change. The report’s findings are explicit. Despite the aggressive shrinking civil space in Uganda (the CIVICUS report ranks Uganda as “repressed”), civil society appears to have shown a remarkable turnaround in recent months, re-imagining how development should be done by building a new ecosystem rooted in local community action. The new approach is already yielding dividends.

To find out more, Ese Emerhi of the GFCF and Barry Knight (an independent measuring and learning consultant who advises the GFCF) caught up with Moses Isooba, Executive Director and Sarah Pacutho, Team Leader for Civil Society Strengthening, from UNNGOF. They wanted to find out what new insights and reflections have come out of implementing the Giving for Change programme in its first year of programming, and what their vision and hope for a re-imagined development sector for Uganda is.

Barry Knight (BK): You talk about a new approach to doing development differently, a re-think if you will. What made this happen? 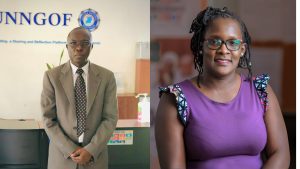 Moses Isooba (MI): In the face of such threats to civil society, it was clear that a new approach was needed. Money from outside donors was no longer an option because it ran the risk of local organizations becoming classified as foreign agents and would lend itself to the government’s dominant narrative that NGOs are “foreign-funded proposal writing outfits.” The answer was to leverage the current appetite for community-led development and raise local resources. So, whether we’re calling it community resource mobilization, domestic resource mobilization, or philanthropy, we decided that this was the way to redefine development and to prove to the government that we are not a foreign agent. Whether one refers to this as localization, locally-led development, community-led development, people-led development, #ShiftThePower, or something else, it’s time for the Global South to touch the reset button.

Ese Emerhi (EE): What has the Giving for Change programme meant for the work of UNNGOF and Uganda more broadly?

Sarah Pacutho (SP): Giving for Change came along at exactly the right moment. At the start of the programme, we had to change its name from Giving for Change to Philanthropy for Development due to sensitivity with the government around language and certain words that triggered resistance.

As part of the programme, UNNGOF produced five “sense-making” policy briefs on philanthropy covering the themes of: 1) Meaning and Practice of Philanthropy; 2) Nexus between CSOs and Philanthropy in Uganda; 3) Philanthropy and Foreign Aid; 4) Giving with the Head or with the Heart; and, 5) The Shadow Side of Giving.

These reports were an opportunity for us and our community to assess what philanthropy means, and how this relates to giving for development as opposed to charity. The reports also enabled us to test out various models of giving. This work enabled us to assess whether a community-driven approach was viable, and we found that it was. For example, we heard stories of how a community came together to problem solve and contribute to solar panels being installed in the Community Health Centre for improved service delivery…

The full interview is available on the #ShiftThePower Treehouse.