Towards the system we want: New report documents story of an experimental partnership aimed at “localizing” the localization agenda through African philanthropy

What will it take to negotiate and nurture new ways of working and new types of partnerships that could see increased flows of international (humanitarian aid and development) funding pass to and through African grantmakers / foundations (existing and future ones) and, in the process, leverage local resources, grow local constituencies and work towards “the system we want”? 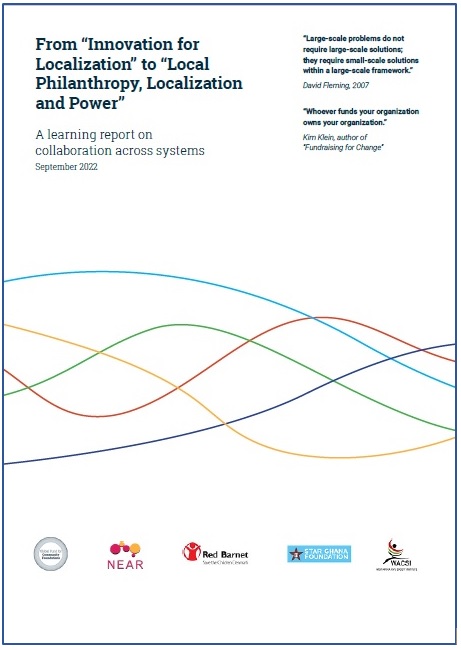 This was the “big” question that an unusual alliance of five civil society and international development actors – the GFCF, NEAR Network, Save the Children Denmark, STAR Ghana Foundation and West Africa Civil Society Institute (WACSI) – sought to explore through an experimental joint project undertaken in 2021. What began as an initial focus on the international systems preoccupation with “local funding mechanisms” would expand to a much broader exploration of the intersections and pathways between, on the one hand, the international aid system’s “localization agenda” and, on the other, local civil society and philanthropic sectors in Africa, especially local grantmaking funds and foundations that themselves are seeking to mobilize domestic philanthropy and local cultures of giving.

Central to the ethos of the project were two ideas:

The project involved a range of activities, including the creation of a new institution in Somalia, the Bulsho Fund, experimentation around local resource mobilization in Ghana and a research and consultation component (including an online conference), details of which can be found in two blogs: The localization agenda: how successful is it? and Pathways to effectively operationalize the localization agenda.

A final learning report, which is published here (and which was originally written as an internal learning document for those involved in the project), seeks to surface some of the dynamics – both the blockers and the enablers – that can arise when diverse actors, each with their different frameworks, narratives, assumptions and types of power, come together in the spirit of collaboration and of “weaving the new.”

The localisation agenda: How successful is it?

Read online
News
Measuring what matters,...
How to #ShiftThePower...
Shift power and...
wpDiscuz