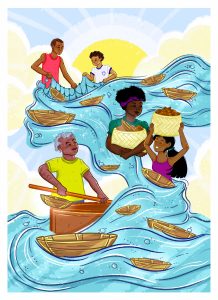 When a few people want to cross a river they might use a canoe, but if the people are many, one canoe is not enough. Community philanthropy happens when the canoe that is being used ceases to be enough. To cross the river with more people, you need connected canoes moving together and looking out for each other. This has been our guiding philosophy in Baixada Maranhense.

Baixada Maranhense is a region in the State of Maranhão in North-Eastern Brazil. Baixada Maranhense is loosely translated as the “low lands of Maranhão.” It is made up of large low plains that flood in the rainy season, eventually creating huge lagoons. The region represents the largest set of lake basins in North East Brazil. During the rainy season, the lakes overflow, creating floods that sometimes cut off the roads, thus, the necessity of canoes. In the dry season, the region is turned into a large expanse of dry fields. Neither season is ideal for much economic activity. Maranhão is considered the poorest state in Brazil and is an important focus of the State’s development work.

In 2013, after ten years of intense work in the region, a group of Baixadeiros got together to discuss what the region’s future might look like. They wanted to support the development of sports, communication, agricultural ecology, and social justice in the region.

This is an excerpt of a blog written by Diane Pereira Sousa, President of the Baixada Maranhense Community Foundation in Brazil. To read the piece in its entirety, head to the #ShiftThePower Treehouse.