A member of a small Colombian civil society organization said to a colleague recently “We’re invisible!” She felt ignored and unheard, and in GFCF podcasts I produced last year contributors had the same feeling: “Most times you don’t have those instances where agencies or organizations take time to do listening.”[1] The promise of “Localisation” changing the rules is seen with suspicion. As Manu Gupta from SEEDS India and the NEAR Network said: “Localisation is more for INGOs and donors in the north. Local action is what organizations such as us are engaged in.”[2] Although we fight to #ShiftThePower often all that happens is #ShiftTheMoney, and for our podcast contributors the two things are very different. For them localisation just means: “Here’s all our money. And now we’re going to run your organization to do it the way that we’ve seen it done in 50 other countries.”[3] Very little power has been shifted, local voices are not heard. People and local organizations remain invisible.

If we want to change the game can better communication help by getting people talking, collaborating, acting in solidarity? Can technology help with all this? I’m a great believer in the power of communication. I’ve worked with “communications for development” (CfD) for a while now and I’m clear it’s not about technology, it’s about philosophy. I’ve tried many things. I helped build a global network because there’s a power in solidarity and collaboration. I’ve used video because it can tell stories more powerfully than the written word. I’ve used Skype, Zoom, forums, webinars, podcasts, and the whole mushrooming social media toolkit because it gives people new ways to talk and share. I’ve also seen the power of getting people together in the same room, and seen their hunger to do so. Along the way, I’ve seen that everything I’ve tried faces barriers. Those barriers are never completely overcome. Most of these initiatives are experiments and some fail less than others, but we learn from all of them and out of them emerges not a technology but a philosophy. Here are a few steps along the way:

If we want to change the game can better communication help by getting people talking, collaborating, acting in solidarity? Can technology help with all this? 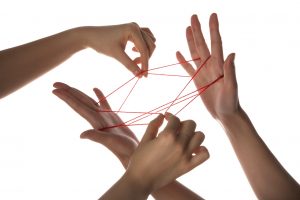 Cat’s cradle: a child’s game in which a loop of string is put around and between fingers to form complex patterns

It was 2010. I’d been working with the emerging Global Network for Disaster Reduction for a year. Hundreds of member organizations, mostly small civil society organizations working at the community level had joined. We’d used email, forums and the website to get people talking and working together. Now we could afford to get 80 of them together in London. The basement hotel room was packed. The noise was fearsome; constant conversation. We used technology – “voting systems” – so that everyone could click their keypads to voice their opinions. Yes, it was technology but philosophy too – people fed back that it reduced the “voice of the big man” effect. It was good to talk. Nevertheless, when I threw up two graphics on screen – a radiating spider’s web and a tangled “cat’s cradle” – and asked which represented the way we communicated, everyone agreed the spider’s web was the most accurate picture. I asked how many people had communicated, for example, with one active network member and a few hands went up. I asked how many had communicated with the secretariat and of course everyone had. The secretariat was at the centre of the spider’s web. The London get-together was a rare shift from spider’s web to cat’s cradle…for the privileged few able to get there.

How could we change the spiders web into a cat’s cradle? How could we unleash the power of the membership collaborating together? Maybe they could share learning? We launched a video storytelling project “Action at the Frontline”[4] and, based on previous failed experiments, we made it collaborative with members writing scripts, assembling pictures and a tame videographer assembling the videos for them. A chance conversation suggested turning the project into a competition with voting. This was a great motivator. Hoping for ten videos, over fifty streamed in and people pored over them to assign scores.

Several of the videos showed how it’s the process of collaboration which is as important as the outputs. For example, one told of a community in the Lower Motowoh district of Limbe City in Cameroon. The word “lower” is the clue: inhabitants lived on cheap, low-lying land that regularly flooded because of the silted watercourse and blocked drains. The video told how the local civil society organization worked with the community to take action. Resignment and passivity made it hard and many weren’t prepared to take part, but gradually the watercourse was dredged and garbage cleared from the drains. When the community came through the next rains without flooding they took a fresh look at themselves, more came on board, and talked about what they could do next. The city council took a look too and provided some support. The process created a new sense of confidence and self-belief in the community which was the starting point for outputs, shifting the power.

Nevertheless, though our video project got members looking at each other’s’ stories it didn’t fuel the cat’s cradle communication that I firmly believed was the starting point for building that sense of confidence and self-esteem among network members, making the invisible visible.

Some small-scale projects did get people talking. Members established a Facebook page and used it to chat and share, though siloed into language groups. We held small group Skype sessions, and as people shared their work and methods others quizzed them and went offline to continue the conversations. The network has grown, the successor global gatherings to the 2010 event are a two-yearly fixture but still there is the challenge of shifting the power – within the network let alone more widely.

Some reading this might notice a resonance between the 2010 event I described and the GFCF ‘Pathways to Power’ Symposium in London in November 2019. I was fortunate to attend that and definitely saw similarities. The same packed crowd in a basement room, the same energy and fervent conversation, the same building of collaboration, solidarity, shared concerns, confidence and self-esteem. It’s great to realize there are others who share your struggles and your values, you’re not alone, and you’re not deluded! There was even another cat’s cradle diagram – a Pando network mapping exercise visualizing our connections. Again, unavoidably, we were together for just a tiny slice of time and were the privileged few. It underlined that it’s good to talk – the process as well as the output. But how can that kind of conversation and collaboration happen globally, transcending barriers of geography and language?

It underlined that it’s good to talk – the process as well as the output. But how can that kind of conversation and collaboration happen globally, transcending barriers of geography and language?

I’ve been working on this for a while, and I am wondering whether finally the technology might be catching up with the philosophy. Can communication break through barriers of language and geography? Can we make places and spaces where people can communicate directly with each other in a process creating confidence and solidarity, making the invisible visible, shifting the power as well as the money? We’re just launching an experiment with technologies allowing free-flowing multilingual conversation between practitioners. Maybe this can help tangle up the spider’s web into a cat’s cradle, strengthening the process of sharing, encouraging, collaborating, working in solidarity. If you’re interested and you’d like to get involved get in touch, and very soon we’ll write again to tell you what happened! It’s not about technology (though that can help), it’s about philosophy; I continue to believe that to #ShiftThePower…it’s good to talk.

Read online
News
Darkness, but also...
Call to host...
The GFCF is...
wpDiscuz